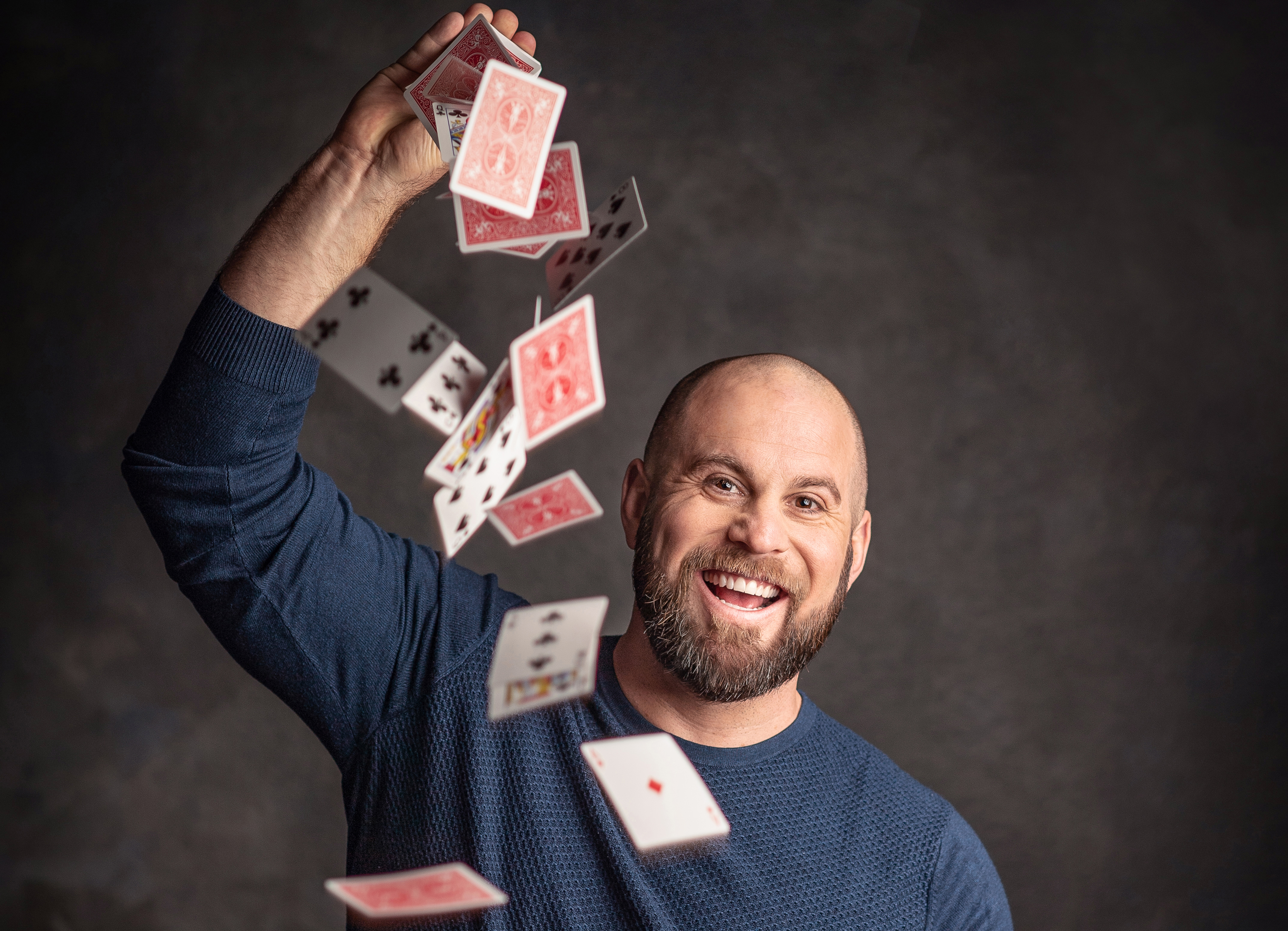 BCA is excited to announce that Jon Dorenbos will be wrapping up our 2019 Speaker Series Line Up at “Breakfast In The Evening”! You might recognize him as an NFL All-Pro or as an elite magician who made the finals of America’s Got Talent and regularly appears on The Ellen DeGeneres Show. But Jon Dorenbos says that what he does is not who he is. Who he is is someone forced, at the most tender of ages, to coach himself into turning tragedy to triumph.

Jon Dorenbos’ past has made him the man he is today. In August, of 1992, at the age of 12, his father murdered his mother. His father was convicted of 2nd degree murder and was sentenced to 13 years in prison. After the completion of his father’s trial he and his sister, Kristina, moved in with a temporary foster family, the Robsons, to allow them to finish their respective school years. Following the school year, Jon and Kristina moved from Woodinville, WA, to Garden Grove, CA, to live with their Aunt Susan. At the time, Susan, had no children and took Jon and Kristina in as her own. She devoted her life to her sister’s kids and became the best mom anyone could ask for.

Jon got into magic just before his 13th birthday. He instantly fell in love with it. Magic became an escape during a time of mourning and transition in his life. He was obsessed with the sleights and skills involved. He spent all day, every day, practicing and rehearsing in front of the mirror. Jon’s Aunt Susan, had a friend, Ken Sands, who was a magician and she made the introduction. Ken became a mentor, a friend and a father figure for Jon for years to come. Ken didn’t just teach Jon the fundamentals of a trick, he taught him how to find himself as a performer.

“I was staying with friends in Woodinville, Washington and their neighbor was a magician. He was a 16 year old named Michael Groves. That was the first time I had ever seen a magician perform. Cards, coins, sponge balls and fire. What more do you need? Nothing. He inspired me to learn magic. Then I saw David Copperfield on TV and that inspired me to be a magician and a performer. People ask me all the time, ‘What is your favorite trick?’ In 1993, David Copperfield was touring with his show called Fires of Passion. He had a TV special and I watched it. I will never forget this. He brought a woman on stage and sat her on a stool. He explained that when he was a little kid he wore little shoes that he called Air Coppers. He takes his baby shoe and puts it in his back pocket. He borrows a ring and makes the ring disappear with such ease. His hands never left his side. He explained that when he was a little kid he would make his friends rings disappear and reappear tied in the laces of his shoes. Sure enough, he turns around and the ring is tied in the lace of his little shoe. By far, my favorite trick of all time. I owe a big THANK YOU to Mike Michaels for introducing me to David Copperfield and getting me a private tour of his warehouse, it was a dream come true. I love the art of pickpocketing. My favorite pickpocket is Apollo Robbins. If you’ve never seen him, Google him!”

“On a personal note, I’m sorry if I disappoint you. I can’t levitate in the middle of Times Square or push over a palm tree in Vegas with my finger. But what I can do… is have a good time. My favorite magician and mentor, Ken Sands, is a genius. He would work with me and give me subtle hints trying to help me discover who I was as an artist. And let me tell you, it took me a long time to figure out who I was as a performer. After watching Ken perform for so many years, it finally hit me! I finally figured it out. For me, it’s not just about the magic. Magic is a tool to develop a relationship with the audience. It’s about inspiring people, having fun and rockin’ a crowd.”